EARLY YEARS
​If you have landed on this page - the WELCOME PAGE​​​ a good place to start!​​

The history of the British Chartist Movement deservedly recognizes the names of men like William Lovett, Feargus O'Connor, John Frost, and James O'Brien (aka 'Bronterre').   Nevertheless, there are those individuals - such as John Collins, who is the subject of this website - who have been overlooked, or their achievements washed out by the more flamboyant and popular 19th century reformers and agitators.

​John Collins grew up during a time of economic depression with massive unemployment and many on short time who were subjected to poor pay and harsh working conditions.   People lived hand to mouth selling their possessions in order to eat.   The government was controlled by a wealthy elite, and the working class had little or no say in the running of the country or how their taxes were spent.   Even after the Great Reform Act of 1832 the vast majority of the citizens of Great Britain did not have the right to vote.
EDUCATION
​﻿Like many youngsters of that era,  John Collins started work at an early age, or as he once said:  "... from the time he was very young he had worked for his bread."  Children of the working class were expected to contribute to the family income,  and at the age of seven Collins was forced to work in his father's buckle-chasing workshop.   As a result John would have been familiar with the lack of time and opportunity for leisure and learning. ​ Nevertheless, this was a boy of exceptional character and determination, and we know he read a great deal, or as he put it: "everything he could get his hands on."
Before the 1840s few children attended school, and those who did would have had to pay at least one penny a week for the privilege.  For a working class family,  barely able to put bread on the table,  the cost of education would have been out of the question.
Coming from a working class background, Collins recognized the disadvantages of the lower orders.   He believed in education as a way to elevate the mind and the body, and in turn improve society as a whole.  This was to be the theme throughout the book he co-wrote with William Lovett during their imprisonment in Warwick Gaol.   And following his release from prison, Collins went on to establish the Chartist Church in Birmingham that provided Sunday schools and education for children and young men.

When he was fourteen Collins left his father's business and became an apprentice to Ralph Heaton of Bath Street, Birmingham as a toolmaker and fitter.   Co-incidentally, he trained with another apprentice by the name of Thompson who later headed the Birmingham Committee that organized the welcome dinner for Collins on his release from Warwick Gaol.
Collins is recorded as saying he earned a good living for himself and his family, and that he had been fortunate in his circumstances.  As a toolmaker and fitter, he would have been able to make jigs, fixtures and tooling for mass production, as well as use the machinery on the factory floor.   In a time of great industrial expansion his ability to work from drawings or verbal instructions would have made him an invaluable part of the shift in manufacturing from manual labour to machine operations.   Collins would have been a well respected and an equally well paid operative.

In Defence of the Working Man's Reputation
​In speaking at a dinner in his honour, following his release from prison, Collins observed: "that those who opposed the working classes, asserted that the greater part of the criminals of the country were working men, and that almost all the vice in the land was to be laid at their doors."

Rhetorically speaking, Collins asked why it was the working man was treated with such disrespect.  To which he answered himself, it was because they never stepped forward to show their true qualities and abilities.  He went onto explain it this way:
​Collins also said the middle classes formed their ideas of working men from police and court reports, but he asked who were the thieves and bad characters?  He assured the audience that during his time in Warwick Gaol there were quite as many of the middle class as the working class on trial, and Collins said he would never submit to hear the working man slandered without speaking in their defense, to which there was much cheering from the audience.

SETTING THE SCENE FOR CHARTISM

GROWING SENSE OF INJUSTICE AMONG THE PEOPLE

​Small wonder, then, that the poor and working class were disillusioned and angry with the (class) system and an indifferent government.
​The Great (1832) Reform Bill
​Collins wanted to change things for the better and during the agitation for the Great Reform Bill he became involved in all the movements of the day - in particular trade societies and the Birmingham Political Union [Birmingham Journal April 9 1842 p 4].  Without a doubt he would have been one of the 10,000 working men at the public formation of the Birmingham Political Union on 25 January 1830.   Temperatures were among the worst that year: there had been a heavy snow and canals were frozen over.   Nevertheless, working men such as John Collins answered the call for the unenfranchised "industrious classes" to join the Union's fight for political reform - which culminated in the passage of the 1832 Reform Bill (otherwise known as The Great Reform Bill).
No Representation
Without the vote, the lower orders in society had no representation in the halls of power.  There was no one to speak for them, no one to air their grievances and certainly no one to pass laws that benefited the working class population.  Even the Birmingham Political Union (BPU) that represented the working class and fought for political reform ceased to function after playing a role in the passage of the not so "Great" 1832 Reform Bill.
Poverty & The Poor Law Amendment Act of 1834
John Collins was particularly affected by the poverty of the working class which he observed in the misery and unhappiness of his own neighbours.  In speeches he talked of witnessing numerous funerals of those who "died of want," and said no man could view the present state of the working class with indifference.​  He blamed a corrupt and self-serving government made up of wealthy and landed gentry who made laws to suit themselves, whilst the working families of Birmingham and the industrial north starved on the streets in filth and muck.
In 1836 recession hit not just Birmingham and the surrounding Midland Counties but the whole of Britain.  Trade was down, unemployment up, and those who had jobs were sorely mistreated.   People lived and died in cramped, dilapidated and unsanitary housing that lacked running water and decent toilet facilities - and still the mass of British working class people didn't have the right to vote. Industrialists adopted a laissez-faire attitude, the government looked the other way.  Workers had no say over local factory conditions or housing standards, never mind a voice in the running of the country or how their taxes were spent. ​​​
Meanwhile, people's grievances mounted. They perceived a government that reneged on its support for the poor and unemployed, but expected them to bear the cost of enormous National Debt and loss of life brought about by the wars with America and France some twenty years before.   America (1812-1815) and France (1793-1815)    The Battle of Waterloo in 1815 cost the lives of 15,000 British men.
The Burden of Tax - As Laid Out by William Lovett & John Collins
The extract below is from the book Chartism: A New Organization of the People written in 1840 by William Lovett and John Collins whilst imprisoned in Warwick Gaol.   It shows the terrible burden of tax on the working class brought about from the previous 150 years. 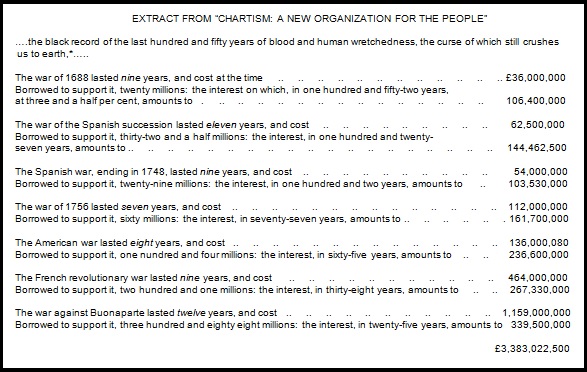 In the words of that friend of the people, radical Member of Parliament John Fielden, in a speech at Peep Green "The (1832) Reform Act has proved a complete failure."  Henry Brewster said:  "....her (Great Britain's) huge national debt, and her immense annual expenditures crush her labouring masses between the upper and nether millstones of remorseless taxation and hopeless poverty."

​Or, as John Collins put it:  ".....there can be no security for the people until they have the right to vote."

JOHN COLLINS - COMING OUT IN A PUBLIC CAUSE

Revival of the Birmingham Political Union
With the deepening economic recession that heralded the "Hungry 40s,"  the former council of the Birmingham Political Union (BPU)  saw the failure of the 1832 Reform Bill together with increasing public discontent as an opportunity to revive the Union that had closed its doors some years before.
​In spite of the council's middle class leadership, their appeal to the public to attend a meeting on Newhall Hill in Birmingham brought out thousands of people who were angered by the riches of the few, the poverty of the many, and a government that didn't seem to care.
This was all well and good, except the middle class leaders on the council of the Birmingham Political Union, including Thomas Attwood, were not true radicals or agitators.   They were men who saw themselves as the "generals" directing a crusade rather than actively taking part in it.  They wanted and needed allies in Scotland and the North of England where the working classes were in great distress.  These middle class "generals" were unwilling to cultivate them.   Enter John Collins, working class man.

At first the newly revived Birmingham Political Union attempted to go it alone on the battleground for political reform.  John Collins campaigned on behalf of the Union in Birmingham and neighbouring towns while the middle class leaders of the Union ignored overtures from the London Working Men's Association (LWMA) that had been formed in 1836 by William Lovett cabinet maker, Henry Hetherington newspaper publisher, and others.   ​​The LWMA was a much smaller and quieter organization of limited membership.  It was working on its own petition including universal suffrage which would later become the "People's Charter" consisting their six principals for political reform.   ​
The old-time (middle class) Union leaders were finally forced to face what they already knew: they were never a national organization; they could not succeed without nation-wide support and recognition; and they had to drop their crusade for monetary reform.  Though in fact Thomas Attwood continued to pursue monetary reform  while he was resident in London.
In the December of 1837 the Birmingham Political Union formally announced they now stood for universal suffrage (as opposed to household suffrage) and democracy, and they famously advertised that the men of Birmingham were willing to lead or follow!

​The London Working Men's Association (with its membership of a few hundred) immediately responded favourably, thus forming an alliance between the BPU and the LWMA that ultimately led to the nationwide Chartist Movement.   Meanwhile 'up North' a radical by the name of Feargus O'Connor bought the Northern Star and Leeds General Advertiser that was destined to become Chartism's most powerful and firey mouthpiece  -  not unlike its owner.  ​
​ Political action was slowly beginning to escalate, and with it the dawn of the Chartist Era and John Collins' political career.

​​Navigation Tips:
​-  Use the Menu Bar at top of each Page to follow the John Collins' story in chronological order.
-  Go to the Content Page to browse all the Pages on the entire website.
-  The Welcome Page gives an overview of the life and times of John Collins. I recommend you start there.
-  The purple button will take you to the top of this Page.