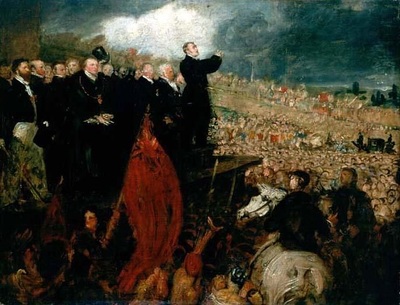 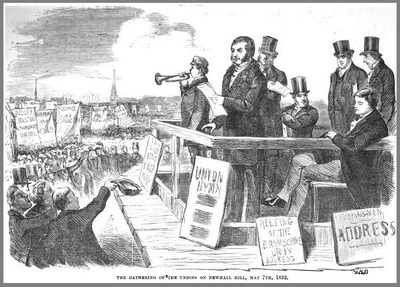 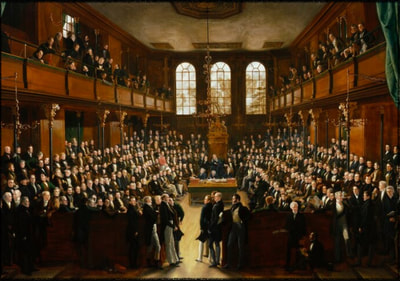 House of Commons NPG #54 (CC BY-NC-ND 3.0)
Birmingham and London   ~~  Before and after the Great Reform Bill
The Birmingham Political Union was a parliamentary reform group originally founded 1829/30 by Thomas Attwood a local banker on a personal crusade for monetary reform together with a handful of business men who shared his economic philosophy and middle class background.
Described as a middle class radical and currency crank (The Fight for the Charter, Neil Stewart) Attwood had trouble finding public support for his start-up organization, but after  re-branding himself as a political reformer he was able to get the organization off the ground.  During the next decade the BPU became a major political force in the Midlands with some 9,000 registered members in its first year.  ​
As a result of the 1832 Reform Act, Birmingham acquired two Members of Parliament, including Thomas Attwood and Joshua Scholefield.   This led to the town receiving a charter, incorporating it as a municipal borough in 1838 with the ability to appoint its first mayor, William Scholefield, the second son of Joshua Scholefield MP.  (Birmingham did not become a county borough and city until the end of the 19th century.)

Unfortunately, the 1832 Reform Act  did not give the vote to the working man, as the country was led to believe would happen once the middle classes had more voting power.  The Act extended the vote to middle class men who owned or rented property worth ten pounds sterling - giving rise to the somewhat derogatory term "the ten pound voters!"
From the working man's point of view the 1832 Reform Act accomplished no great political change at all.    Friend of the people,  John Fielden MP (Member of Parliament for Oldham, Yorkshire) reflected that general opinion when he told the great meeting at Peep Green "The Reform Act has proved a complete failure."   Others (Barker and McCaulay of Yorkshire) said that the 1832 Reform Act simply united the middle and upper classes!
After the dust settled on the hoopla surrounding the passage of the 1832 Bill, the leaders of the Birmingham Political Union found themselves going it alone on currency reform and other issues.  Membership fell off, and its middle class leaders discovered they actually had very little real power over the government or the country.  The BPU fell into decline, eventually closing its doors in 1834 until some three years later (May 1837) increasing public disappointment in the 1832 Reform Act together with a distressed economy brought Attwood and the BPU roaring (at least temporarily) back to life.
Second Demise of the Birmingham Political Union
​As the Chartist Movement found its feet, the re-activated Birmingham Political Union would once more ceased to be.

​In its 'second coming' the BPU was (as before) headed by middle class men who traditionally adhered to peaceful "law and order" protest to gain reform.  However, the ascending Chartist Movement with its working class base grew frustrated and impatient at the failure of the 1832 Reform Bill to make change.
In 1839, Parliament's rejection of the National Petition (presented by Attwood) calling for the suffrage and other reforms widened the gap that already existed between the middle and working classes.  The working class lost faith in the middle class and the  old "law and order" way of doing things.  As a result the working class  became increasingly influenced by the firery, revolutionary talk of the Northern radicals who eventually dominated Chartism.

Meanwhile, in Birmingham,  working class militants were gaining  support.  Amid much bitterness the middle class leaders of the BPU dissolved the working class  wing of the council before they themselves resigned and gave up the cause.  On 9th April 1839 the Birmingham Political Union held its last meeting, closing its doors forever more [Speeches That Change Britain, Reeks p 27].   As Mark Hovell  put it in his book The Chartist Movement: "The Birmingham Union died in giving birth to the Chartist Movement."
Support for Mr John Collins
In one of its lasts acts, after its collapse, the Birmingham Political Union gave its support to their former working class colleague, John Collins, who was at the time incarcerated as a political prisoner in Warwick Gaol.  On June 26th 1840, twenty-one former council members of the disbanded BPU approved a remaining balance of seventeen pounds sterling (after all debts were discharged) to be paid over to the committee responsible for taking subscriptions for the benefit of Mr John Collins and his family (Birmingham Journal 25 September 1841).